This is just a test, but if the video works for you guys, can you please comment.

So I had lunch out of a vending machine today simply because I went to the cafeteria too late and they were closed. After I finished my wonderful meal of unhealthy food, I started to think that they should have better vending machines in work places. I stumbled across this machine...imagine if you could get hot pizza in just 90 seconds...hahaha. 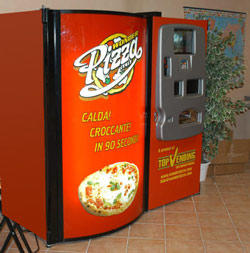 I think you could also make a game out of the vending machines too. Check this one out!!

Hahaha....you could put in like $2 and try to catch yourself a lobster....and then if you still can't catch it by like $10 then it should catch one for you and give it to you. It gives you a real good incentive to get good at the claw game. They should put one of these machines in chinatown....that would be hilarious, but they should have two machines....one to catch it and one to cook it.

Reuben Morgan is coming to Calgary again. He's going to be at Tehillah on Oct 3. I don't know if you have to buy tickets or not, but when United came, you had to buy tickets. So check the First Assembly website for more info.

He's doing a Canada wide worship tour, so check out his website to find out when he's going to be in your town! :) http://www.reubenmorgan.com/calendar.asp

For those of you who don't know, Reuben Morgan is from Hillsong Australia, and he wrote some of their "famous" worship songs; actually a lot of them

On a different note, but somewhat similar. Did you know that Blessings has something called new music Tuesdays? Whenever something is released for that week, the price of the cd will be $12.86, but only on that Tuesday and only on certain cds. It's really cool. Some cd's to look forward to:

So she came to me the other day and said, "We need to talk". I had always enjoyed talking to her. She'd been behind me for the past 4 months. It was good.

"There needs to be a change. There's somebody else."

"I told you that this wouldn't last. It just wasn't right. Although we did have our laughs when people got jealous of you, but now there is somebody else."

I am really going to miss my cubical.....goodbye window....goodbye cube neighbours....time to go to my dark corner by the supply room......

I never really was supposed to sit there in the first place, but now that they filled the position for the person that is supposed to sit there, I get the dark corner with no one to talk to....
I guess the good thing is that my boss won't be sitting behind me anymore. I am no longer under the watch of the supervisors and managers behind me.

Last week was a blast. I can't believe it went by so quickly. Summer camp was awesome. It's just amazing how everything just came together. Even the speaker was very entertaining to the youngin's, and he told funny stories and so it pretty cool. A very nice guy too, and his family is super cool.

So life after summer camp is kinda crappy. I didn't have a really good day yesterday. It was going good until after lunch. I was walking to my car and when I got into my car, I sat down. I noticed that a red address book that is usually in my dashboard was on the floor, and then I noticed that my change compartment was opened, and then I noticed that my passenger door was unlocked!! and then I was like....SOMEONE BROKE INTO MY CAR!! I looked through my glove compartment and they stole my sunglasses, and then I went into my trunk. Everything was all messed up. I looked over on the outside of my passenger door and they completely ripped off the lock to the door...and scratched my door up...I was very angry. I felt violated. They stole my bag with my U of C water bottle and my workout clothes ...which is kinda gross..hahhaa.....and they stole my hat, and they stole 2 brand new CD's that I just bought....with the receipt in the bag.....bah! But the weird thing is that they didn't steal my discman. Probably because it was crap...I mean my discman is the size of square brick...it's soo old, but they stole the car adapter for the discman which I find really odd, but they didn't steal my cell phone charger. Oh and they stole 2 cokes from my cooler bag, but didn't steal the bag, and my mom thinks they took a sip from a bottle of water....hahahaha. I told her that was pretty stupid if they did, but she threw it out anyways.....

I guess you never really understand what the feeling is until something like this happens, but I was angry....I'm still kinda angry. I'm thankful that my guitar wasn't in my trunk though or all my other CDs, that would be terrible!

I have like 20 mins left at work and then it's the WEEKEND!
and then summer camp is just on Monday! 1 entire week off spending the time at summer camp. It's going to be awesome. The weather forecast says that it's not going to be nice, but I'm praying that we get good weather for games...PLEASE GOD!!

My ears are still kinda ringing.

I really like the setup of the stage though. They had a whole bunch of busted up guitar amps stacked behind them making a wall, and then they had lego shaped LED video screens above. It was really cool.

The only thing I didn't really like is that people were smoking up everywhere. It was really smelly. Now I know how Karen feels in Kamloops! :) hahaha

I did a funny thing today.

So after lunch today. I was going up the elevator to go back to my cube and so the door opened and I walked out. I was following somebody and so I didn't have to use my keycard, when I walked in...something looked really funny. It didn't look quite right...Everything was in the same place. It was exactly the same, but it was different. So I kept on walking until I reached my cube...and then I looked around to where people usually sit, but different people were sitting in their spots...and then I realized I was on the wrong floor! hahaha....and so I calmly walked back out and when I pushed the elevator button, my cube neighbour was in the elevator and she gave me a puzzled look so I had to tell her the whole story..hahaha...oops!

What's not funny is where the soccer ball hit me yesterday.....but that's a whole different story in which I choose not to recall.....