Another highlight of the month definitely is Jesus Expo! 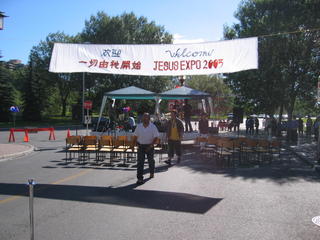 Here's the stage....I believe it has just been finished setting up.

Those tents on top didn't stay for long as the wind eventually blew them off...so they stayed off! 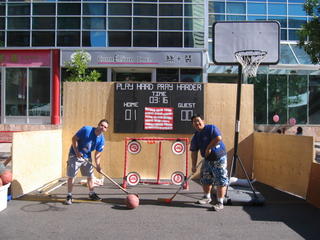 although they did match in their clothing, so I give them props! 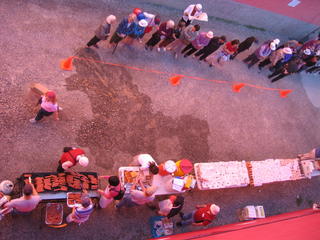 Here's where they gave out the hot dogs...
As you can see, we didn't have to tell the old chinese ladies we were giving out free food.

We told them to walk around and that there's plenty of food for all, but I think they only heard two words.... 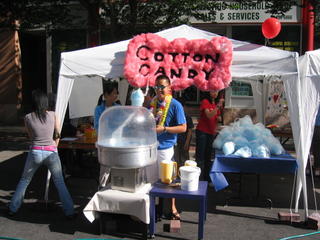 Here's the cotton candy stand, which was super popular. That sign looks pretty sweet too! 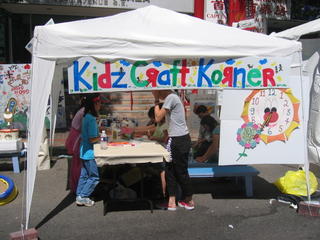 There were lots of kids and I think they all had fun! 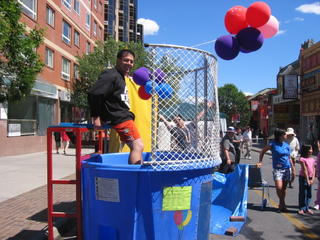 Probably the one thing that everyone wanted to play....the dunk tank!!

There's Milton getting ready to get dunked!
Too bad he was cheating and wasn't dunked for like 30 mins! 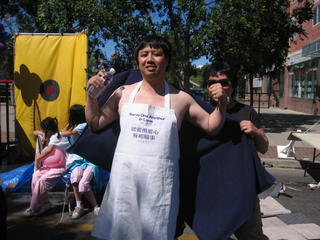 I think everyone wanted to dunk this guy!! hahaha, but I think he had the best swim suit!!

That dunk tank water was FREEZING! I don't know how you did it Uncle Bill, but it sure was entertaining! 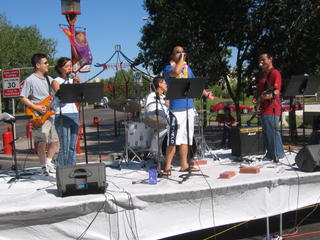 We ended the day with some good old CPC worship! haha!

Nothing like being super loud on the streets worshipping God!


It's ALL because of God that we can do something like this! He gave us the awesome weather and the awesome turn-out!! You da MAN!

Stay tuned for more pics....I have pretty good ones, so they might just be popping up every now and then. I just have to add this last one in though because I thought it was really funny! 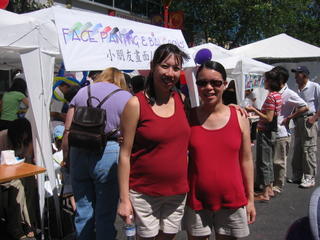 Since their husbands are brothers...

...They have something weird in their family that tells them to dress the same when they are "El Prego".

I know these pictures are late, but meh...what can you do?? 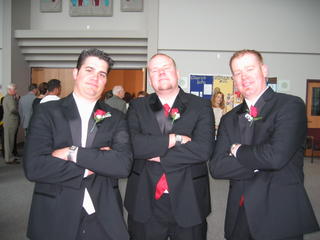 What's Up! This is pics of Kate and Tyler's wedding!! Definitely one of the highlights in July 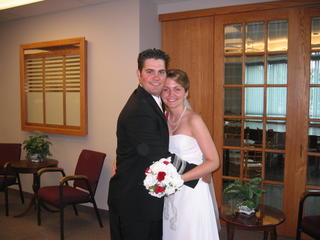 Here's to the happy couple! Congratulations! I hope you guys have a wonderful new life together!

You have to invite us over so we can fire up that Boy-Q hahaha! 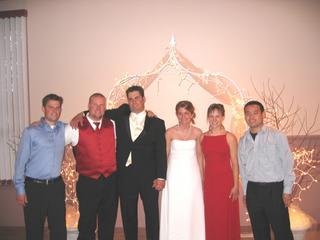 Here's the gang....slowly we are growing up! I still remember grad camping. 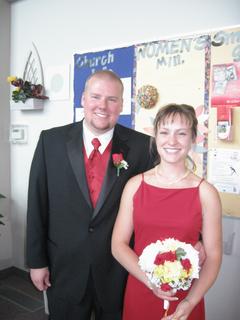 Here's to the next couple on the Hit List! hahaha

I'll be waiting for my invitation guys!

Well, my business trip is coming to an end...here I am blogging on somebody else's computer during work time.

Hanging out in Ft. Sask by myself was quite interesting....not much to do out here, but eat. I walked around superstore by myself yesterday....haha....too bad people look at you funny when you are walking by yourself buying all this junk food!

I did spend some time with my cousins (from both sides of the family).
I went to K-days for a bit....it's exactly like the stampede, but to a lesser extent. There's no big shows...and no spirit. In Calgary everyone wears cowboy hats and gets into the mood. At k-days, there's nothing....and it's not very crowded either. It's kinda funny because they have the all you can ride pass here and they don't have it in Calgary....and the admission here is only $8 not $13. I didn't think that it changes as the carni's go across the country.

Time for the drive back this afternoon....hope I'm not too tired....gotta stay awake!

I'm excited about Saturday...but I'm super tired from the rest of the week.
I don't think I'm doing much for Jesus Expo so I'll just be wandering around talking to people, eating, and playing games! hahaha....

I can't wait till the evening when there is the worship...that will be really cool. Definitely an experience that I don't want to miss. I hope the weather holds out.

God, please give us nice weather....the perfect weather to be out in the streets!! Thanks!

I still haven't thought of a good picture to put at the front of my blog to complete the layout....I need a super good one.

I got a new layout....
I decided that I wanted something different from everybody else, but in order to be different, I had to copy the new layout from somewhere! hahahaha

Who can guess where I got this layout from?

It originally had a picture where the "x" is, but I'm going to put a different picture in.
If I put the original picture in, then you guys will know for sure where I got it from.

I did change it a bit by adding comments and the profile thingy, but that's about it.

They had some engineering meetings this week so that's pretty cool. Meals paid for drinks paid for...it's all good. On Tuesday after the meeting, we all went to go play laser tag and then we all went to good 'ol Ranchmans. There were tons and tons of people. Lots of old people though, but it was still funny watching the "cougars" targeting their prey.

I also got to ride the mechanical bull!! that was very fun and hilarious at the same time.....even watching my bosses go on the bull that was a highlight for me.

This morning there was a stampede breakfast in the lobby and the CEO/President and all the executive VP's served us pancakes it was cool.

I also won a centennial pen & pencil set. It's pretty nice, but too bad there's the 2005 centennial stuff on there. Well that's basically my week. In a couple of hours our exec. VP in charge of our department wants to have a party with us....hahaha.....

Man, my legs are tired. Maybe it was from all that running for football. At least we won!! Everyone says that they weren't tired, but how come I'm so tired? Could I really be that out of shape that everyone can play football and still have lots of energy? Maybe it's all those stampede breakfasts/lunches I'm having....hahaha..it's slowly getting to me. Speaking of Stampede meals, here's a list of the downtown meals. I was going to go to Gulf Canada Square this morning, but then I'm pretty sure I would be full for lunch and that would mean that I couldn't go to PetroCan with Milton.....hahaha....I don't think I've ever had this many stampede meals before. 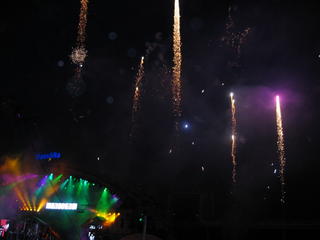 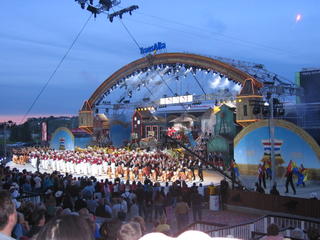 All the years I have lived in Calgary, I've never seen the grandstand show ever! but it was super cool. I think you have to experience it at least once. So many people on stage, and all the singing and dancing and fireworks....it was cool. Sometimes there was just too much to watch though because a lot of things were going on at the same time. I think the coolest thing was the "cirque de soliel" type acrobatic stuff because they were doing the rope dangling stuff and the balancing. I wish I took pictures of the stage when the fireworks were going off, but I didn't really think about it. I have some video though.

I got to ride a trike over the weekend. What's a trike you say?? Well, it's basically like a quad, but with 3 wheels. It was super fun driving that thing all over my friends farm.

This weekend was very fun, but tiring. I think the best part was the bachelor party for my friend. We went paintballing and so it was hilarious. We gave him a pair of tighty whities to wear outside his coveralls and I think it said, "A fart a day keeps the wife away" hahaha....after paintballing those tighty whities were so dirty. By the end of the night they were ruined though because we gave him wedgies every chance we got.

Man, farm life is totally different and you can totally tell who the farmers are and who isn't. We decided to have a campfire and so to light the fire, my friends dad pulled out a propane tank and a huge torch, and then he lit the torch and stuck it in the fire. We were literally burning entire tree trunks. No need for chopping whatsoever. The flame from the torch must have been 4 feet out...and the fire must have been the size of a small bed...it was cool. I'm gonna build me one of those torches...hahaha.
[My Pics 1] ~ [My Pics 2] ~ [My Hook-ups] ~  # posted by Leo @ 7:36 AM 0 Gibberish