Maxing and relaxing here in honolulu.

We went to the north shore and the east coast! It was cool. I saw huge turtles and I went boogie-boarding...

I always thought it was easy, but it's actually more difficult than I thought, but it's all good. Tasted some good salt water..mmm...salt water. Here is a pic of me surfing the waves. That's dakine

Guess where I am?? Probably you already know, but it's really cool. I'm here in Hawaii!

It's funny because it feels like I'm at home...or in China, just english speaking. It's really humid here, but it's nice. 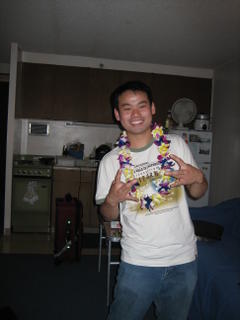 Let's see what I have to eat tonight...grapes, popcorn, spitz, and timbits...mmmm. By the time I'm finished up here, I'm going to be all messed up. My system is all out of sync.

Sweet only a little over 5 more hours left. I hope it goes well tonight. If it goes the way it is going, I might be able to go home early.

Yesterday was really long because they had some problems and so we couldn't do anything and so I just sat and did paperwork.

A funny thing happened to me though....it's not as funny as BJ's, but it's kinda funny. So there I was typing away at the Sundance lab on my laptop and all of a sudden, I feel something on my lips. I started to think...huh...what's on my lips??! and then I thought...wait a minute. Just then, I opened my eyes and my face was straight down on the keyboard....hahaha.....I sat back up and looked at my boss. She had a puzzled look on her face. I must have fallen asleep and not know about it :) hahaha.....I looked at the clock....oh man...it's 4:00 AM...

Tonight is a lot better. We can actually take samples and so we have to do something every hour. Plus, I have a lot of snacks. As we speak, I have a bag of Ms. Vickie's Salt and Vinegar chips to my left, Starbursts directly in front of me, and a Jone's soda to my right...I'm good to go. Oh and behind me is leftover BP's Pizza.

I got to take a tour of the boiler today. Before I could go I had to get suited up though and so we raided the tool shed. I got me a cool plastic body suit to protect me from light chemicals, a neato face shield, new safety glasses, and a cool respirator. It was like I was meeting someone with ebola, but the gear wasn't as freaky.

Only two more days of 7pm to 7am shifts, and only 5 more hours till this one is done...

So somehow about half of my code went missing and so I decided to change it.

I think I still need to work on it a bit, but at least the base of the design is there.

This template describes my reaction when I figured out what happened....hahahaha.

I don't know what's wrong with my blog, but there just a black screen...

are all my posts gone?? all my thoughts, brainstorms, ideas?? GONE?

8 More days until this: 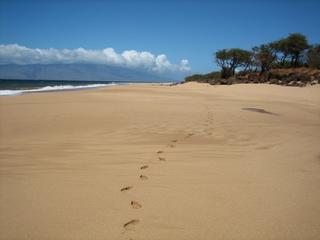 I have to brush up on my Hawaiian.

Well I head up to Stony Plain on Saturday. It sounds like it'll be an interesting trip, but it's going to be long work hours. I hope I don't fall asleep...hahaha....

BLASTED!! You know what urks me...
I can't play the new Switchfoot cd on my work computer because it needs to install a special player that is on the cd and I don't have enough privileges to install it. Stupid SONY/BMG and their "anti-copying" cd. This is a new product from them so I'm hoping that a crack will be out there soon....hahaha....

10 points to the person that knows what I am doing in Stony Plain! hahahaha j/k.....too much time and effort is involved to keep track of that, and I don't want to steal that game away from Jackson. I'll think of a different blog game we can play...hahahaha.

Everything is the same.....it's so monotonous. Even the traffic lights are the same. I get off the train and the traffic signal that goes across the train tracks just turned red so I walk straight. I'm always kinda wishing that something interesting would happen. Maybe one day someone will do something stupid and run across the street when a car is coming and then I can jump out and pull them back.

I did listen some excellent sermons on hillsongs tv the other day (something I also do at work often). The series was called "Use What is in your hand" and it really was quite true. The pastor (Brian Houston....father of Joel Houston) was talking about how God gave you gifts and so you should be using it. Often people ask and seek God to see what He has in store for them, but what they don't realize is that it could be RIGHT THERE in front of them. If God has given you a talent, you should use it for God, not brush it off. The pastor gave a great example of how a famous rugby player decided to quit rugby and go into the ministry because he thought he would have a bigger impact doing that, but in reality he had more of a pull being a rugby player because he was good at it and he had tons of fans....anyways...I'm probably not giving the sermon justice so you should check it out yourself. It's a 4-part series.
http://www.hillsong.com/tv/bin/view.pl?sitename=tv&page=streaming.

"The talent that you possess are God given gifts so USE IT!" 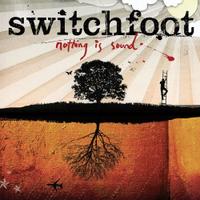 Switchfoot
"Nothing is Sound"

(does anyone know how to automatically load the "currently listening to" thing in blogger?? Or is that only for xanga people?)

Having little or no school this year is going to be weird.

I'm usually back hitting the books at university right now, but this year is going to be different. It's funny, because I still get up earlier than when I would have gone to school, but not much has changed from school to no school except for homework and exams...

I still sleep during the day...hahaha. I've gotten quite good at having one hand on my mouse and one hand on the keyboard, pretending to read the incredibly small font on my computer screen. It's so small that I have to squint! hahaha.....or at least that's my excuse. Since my eyes are so small anyways, I don't think anyone can tell if i'm sleeping or not..hahha....they finally have a purpose....all those years of being made fun of is finally paying off! :) hahaha

I took the C-train today. I think I might take the C-train from now on. It saves me gas money and parking money and it's about the same time as driving, but now I really want a portable media player. The walk in -40 degree weather might change my mind about training it though.

I wonder if any office pranks happen to people. I've never seen any since I've been in the cube life. I've only heard of people going on other people's computers and emailing someone about how much they love them....that's pretty funny, but imagine if someone did this to you... 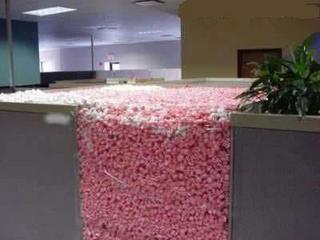 I'm using a different third party server so if it doesn't work, then please comment so I know. If it does, comment anyways! :)

I guess the summer is gone. It kinda really sucks getting up in the morning. Before, there used to be a nice blue sky with the sun rising, and now it's just dark.....darkness. I guess it's kinda cool now that you can see more stars, but it's only going to get more depressing when the sun starts to set early too. Then I won't be able to see the sun at all.

I guess it's time for me to turn pasty like all engineers! :) hahaha

Have you guys seen the new ipod nano?? it's so small!! I guess they got rid of their ipod mini line and replaced it with the nano. 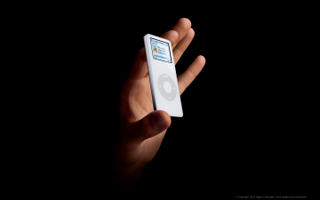 Pretty insane eh?? it even has a click wheel?? I kinda want to get it just because it looks soo cool, But I think I'll stick with my portable media player.